This is a translated (and polished) transcript of my talk (slides here) at the XV Congress of the Association Luca Coscioni about Research Freedom.

Good evening, my name Giacomo, I’m a programmer and I will try to share here a more practical perspective on these matters. I will talk about the symbiosis between humans and machines, trying to envision a path that can move us forward into this direction.

Now, if we introduce a new specie into an ecosystem, be it artificial or not, we break its dynamic equilibrium with few possible outcomes:

We can thus see at least three phases:

which is a little magical, it’s always arbitrary, since it’s up to humans.

But where do these data come from?

To understand this I suggest you to look at this except from a wikipedia page.

In a footnote it has a link to a primary source.
By clicking such link we spread at the very least 10 personal informations.

Some informations are cultural, some are medical, some are geopolitical and some are economical, since if you are browsing from the last iPhone you probably have different wealth then if you browse Wikipedia from a library’s PC.

Note that this is the bare minimum: with the default browser configuration, you spread a lot more infos. And this is just one click: you can’t even imagine how many precious medical infos you spread by playing an online casual game!

However this data are what AI eat, every day, without any interaction with the carbon cycle: they are neither prey nor predator for other species.

Thus we are left with two possible outcomes:

That is: we can either go to Terminator… or to WALL-E.

Sadly, this year excluding the Terminator outcome became harder since, on March, an artificial intelligence from Uber killed a 49 years old woman in Arizona.

Nobody went to jail.
Not even the car, that had perceived Elaine Herzberg but it didn’t break anyway.

What does it means?

We have two possible interpretations of this fact.

The first is that we have reached the Singularity: the machine asserts its superiority by killing a citizen of the greatest military power of the planet.

Please note the political acumen of this intelligence: while AI are said to reproduce human bias, it killed a white woman in the states; but to avoid a popular uprising it killed a homeless, a poor, a woman that was not relevant in the capitalist economy that stay at the core of the values of that Nation.

This way the car was able to establish a precedent, with a clear message: “it’s allowed to sacrify human lifes to progress; it’s fine to kill people to facilitate the evolution of my specie”.

A super intelligence, as you can see.

But there is another explanation.

That simulator shouldn’t have been driving a 2 tons car in a road open to public transit. Indeed Uber’s engineers explained that the car was configured to avoid emergency braking maneuvers while the vehicle was under computer control, “to reduce the potential for erratic vehicle behavior”.
The car didn’t break to avoid car sickness to Uber’s customers.

So Elaine wasn’t killed for progress, but for Uber’s profit!

Teaching ethics to machines is like teaching sex to condoms.
I'd focus on humans, first.

And this is relevant to us because Uber was invited to test a technology totally inadequated to the complexity it had to face, by an ignorant Governor.

But a Governor whose ignorance is pretty mainstream.

The language we use to describe reality forges our understanding of it.

Thus when we use words like “intelligence”, “learning”, “training” and even “neural networks”, we evoke human experiences, things that are deep in our consciuosness, but that have NOTHING to do with that happens inside these software.

This language is great for science-fiction, but it sucks at science.

It would be easy to adopt a more descriptive technical language, a less anthropomorphic one, but we prefer to easily get funds out of fantasies than to really understand what we are searching with those funds.
After all, the more it takes to find it, the more funds!

However this incident let us exclude the Terminator outcome.

It proves that, even when a machine kills autonomously, it kills after a human choice. A human decided that Elaine life was worth less than Uber profit.

So we are left with a single possible outcome: human-machine symbiosis.

But what is symbiosis?

An intimate association, often obliged, between members of different species, that usually lead to a coevolution.

It’s a long process, started by single individuals of the original species that gain an evolutive advantage over the populations they come from.

Thus we should ask ourselves: who shall inherit the Earth? Who will join this coevolution?

The smart phones into your pockets can make you think you are part of these chosen people, but I have to disappoint you. To raise artificial intelligences you need to control data. You do not control the data about you.

Now, somebody will say that these company cannot do evil, and that the interdependencies produced by the global market will protect all of us from destructive practices.

To reason about this objection I propose you to consider the browsers that serve over 90% of the market: Google Chrome, Mozilla Firefox, Microsoft Edge and Apple Safari.

These browsers are the primary milking tools… I mean… the primary tools to collect users’ data. They are distributed for free, but funded or developed by the companies. But through these software any website you visit can

and several other attacks that would be too long to describe here.

These attacks are possible by decades but they have been reported a month ago to these companies. Still you do not know about them because they closed the security report saying that they cannot fix them.

This is false: in that same bug report, I suggested few simple expedients, pretty easy to implement, that would largerly reduce the attack surface. The problem is that one of these expedients is to make JavaScript execution opt-in (as Flash was) and JavaScript is fundamental to the business model of tons of companies in the Silicon Valley.

We have to understand that the market do not work whenever we have information asymmetry!

Obviously, Europe could start competing on the market too: Macron already proposed France for this race and others will follow.

But I think there are other terrains where Europe, with its complex history, have a real advantage, such as

Symbiosis is a Coevolution

If Symbiosis is a coevolution process, we have to evolve too, we need our collective intelligence to evolve. To this goal we usually use Education.

Today Informatics is what Writing was 5000 years ago: a tool which is totally primitive (nothing we have built in the last 100 years will last!), but an effective tool to collect and retain Power among humans exactly because it is primitive.

But who own such power? 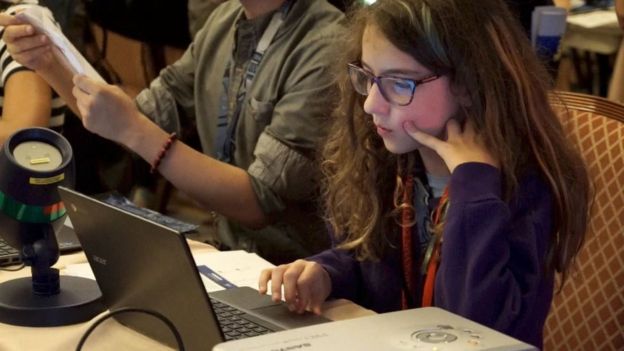 This is Audrey Jones. She is 11 years old and she hacked the electronic election system of the United States of America. In 10 minutes. How is this possible?

Randall Munroe explain part of the problem with this wonderful strip

Our entire field is bad at what we do, and if you rely on us, everyone will die.

(and NO, the blockchain is not the solution, it’s another symptom)

But there is another aspect of this story that is even more important.

which are all preconditions of a true citizenship in the world we live in.

And computers are easy! A SQL injection is a trivial attack: the fact that you cannot do it doesn’t mean that it’s difficult, just that you don’t know how to do it! Audrey can do it, and she is eleven!

Europe need to raise a generation of hackers like Audrey!
A generation that will produce Politicians that understand the cybernetic democracy we live in!
We cannot teach to Politicians how computers work: it must be part of their background from the primary school!

Because, to be honest, people like me will always be able to fool you.
But we can’t fool Audrey… she knows best!

Audrey shows us that we can only be either Hackers or (biological) Robots, either Citizens or Slaves, because (let’s be clear on this) if a software can affect the elections of a Nation, it means that you are the robots!
You that believe you are using the software, while you are being used by the software because you don’t know how it works.

We do not have to teach our sons to use computers, we have to teach them how to create with computers. So that they can build the world they want. A world we cannot even imagine but that we should prepare them to live in anyway.

We must put servers in every house, mail servers… web servers…

And we must start to teach History and Informatics at school. Seriously!

It is the only option we have, not to put chips under skin

This is the Symbiosis we need: to know how to create the Future.