Recently I’ve found myself defining math, science and technology a bit too often. I share my insights here to type less in the future.

Mathematics
from Greek Μαθημα-τικὴ, "the art of learning"
Mathematics studies the structure of the constructs of human mind (concepts, patterns, perceptions...) that can be precisely communicated through language.
Science
from Latin scire, "to know"
Science is the process of forcing the human's perceptions of reality into the structure described by Mathematics, so that it can be shared among humans.
Technology
from Greek τέχνη-λογία, "learning how to build things"
Technology is the process of forcing the human's will onto reality, through the creative use of the knowledge acquired by Science.

Mathematics is a byproduct of human evolution.

But while in this dark age it is used to compete, for thousands years Math has been a collaboration tool.

From such simple definitions, we can infer that

These definitions are human-centric because these are human tools.

Other species, with different brains and languages, would use a totally different mathematics.

And obviously, as our brains evolve, Math will evolve (or devolve) with them. 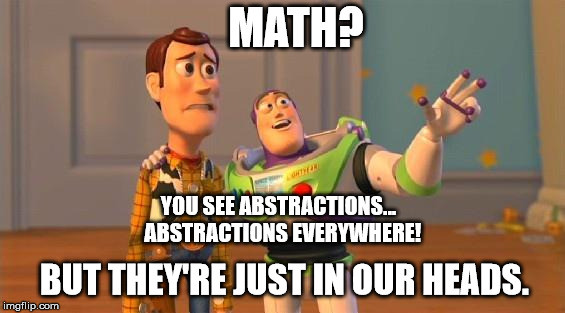 Math can study itself. To me, this recursion is fantastic! :-D

We do not need a definition for Mathematics: its name says it all!

Our perceptions are projections of reality into our minds.
Projections. Like shadows. And like with shadows, a single real object can project several perceptions: we are forced to say that light behaves like particles AND like waves because neither particles nor waves really exist.

This dramatically reduce the glory of Science.
It slams our hubris because it shows that we will never know anything that, for any reason, cannot fit our minds, our brains.

However it explains why proofs are social constructs and why often we need to invent new languages to share our insights.

This also means that Science cannot beat Mysticism.
Whenever you see people using Science or Math against Religion, you know they do not understand what Math and Science are. Science can beat bigotry, but not Faith.

As a programmer, I’m pretty sad about the amount of crap we see in technology.

I think that most of this crap is directly derived from the lack of political awareness among the people who build such technology.

Technology is Politics. You are responsible. Life with it.

Also, understanding what Math is should help debunking dumb slogans like “The end of theory”.
Without models we have no knowledge. It can be fine if all you want is to exploit big data to make money through trade secrets.
But this naive inductionism do not push humanity forward.

We are wasting tons on money dreaming of artificial intelligences, machine learning and similar buzzwords, massively funded with the hope to milk more users and further manipulate them.

Instead, we should use computer-aided statistics to look at the universe… with new glasses.

This is a huge waste of intelligence.